It is Eating Disorder Week, and I wanted to share a bit about my own experience of eating disorders. I don’t think I have talked about this on here before, but it is relevant.

I had an issue with my shape and size since I was very young. I was always a fussy eater, and drove my poor mother to distraction with my refusal to eat anything much – vegetables were definitely off the menu for me, but I could eat sweets, cakes and crisps all day long if i was allowed. I wasn’t, so while junk food was seen as a real treat, I didn’t eat enough and so was quite skinny as a little girl.

At age 10 or 11 I discovered a real love of gymnastics, and while I was late to the sport, and lacked any star gymnast qualities, I loved to do it, and spent much of my time at home stretching, rolling, doing cartwheels and handstands, constantly practising. This came to an abrupt halt when I was a 14 year old in a class of 8 year olds.

Puberty changed my body so that the tummy that had previously been very thin became considerably more rounded. On one life changing day, my teacher, who can’t have been more than about 20 years old herself, poked me in my tummy asking loudly ‘what’s this?’, heaping more shame on my body than my 14 year old self could stand. I quit gymnastics that day, and, not for the last time, turned my back on something I loved out of soul crushing shame.

A few years later, I was mortified when a girl in school pointed at my tummy and asked me, again loudly (or so it felt to me) if I was pregnant. I wasn’t at that point, although as part of the ‘quality time’ I spent with my boyfriend at that time involved eating a lot of junk food while watching films, I had probably put on quite a lot of weight. I have realised in recent years that when I put on weight, it goes straight to my abdomen, giving me that ‘about to give birth’ look.

I was a mother by 18, and a jibe of ‘you’re fat’ from a close family member who meant to tease, not to wound badly, was the final push that tipped me over the edge into a spiral of unhappiness that was to last for years. I had yet to discover (or need) the anaesthetising effect of alcohol, but I knew that I could find solace in sweets and crisps, the very foods that were causing me to gain weight, on top of, of course, having just had a child!

I don’t recall how I discovered the idea, but I soon became a regular binge/purge bulimic, eating very little real food, gorging on as many packets of sweets, crisps, biscuits…any high calorie, high fat, high sugar food i could get my hands on, then ridding myself of the calories and, i suppose, the shame, through laxatives.

Only the laxatives did nothing to remove my shame of course, they did the exact opposite. Not only was I forced to steal them from a local shop, because in my shame I didn’t want the shop staff to know what I was doing, but I had to try to hide how often I was going to the toilet, creating an enormous steaming pile of shame around one of my most basic bodily functions. I came to see needing the toilet as something to be ashamed of, a very unhealthy way to feel indeed.

I have a picture in my head of seeing a reflection of myself in a shop window, with weirdly thin legs clad in black jeans. I know that at the time when I saw that reflection, I looked at it and thought I was huge.

The bulimia was ‘dealt with’, but never really resolved. Eating disorders weren’t understood then as they are now, and I think most people in my life just saw this as an extension of the ‘fussy eating’ from my childhood. The issues at the core of it, my unhappiness, likely post natal depression, poor self esteem, and self harming tendencies were never noticed or looked into. I didn’t know myself, and I certainly I didn’t have the language to describe them. I was immersed in shame and believed myself flawed, not in need of support, so I couldn’t ask for the help I needed, . I was persuaded to eat proper food again, although I did so on my terms, refusing to eat meat, and still sometimes bingeing and purging, but using plums and cherries, rather than laxatives.

It was probably about a year after this, and a series of events that left me feeling more lost and broken than I had previously, that I began the ‘oblivion seeking’ drinking and drug use that was to dominate the next 20 years of my life. The depression, poor self esteem and self harming tendencies had found a new outlet, and I am convinced that the two things are related – the issues that caused the eating disorder never went away, I just found a new way to hurt myself. Up until quite recently, I still had moments when I tended to binge eat then purge, usually using excessive amounts of fruit or exercise. Now I have better self esteem, am far more content in myself and the self destruction button is further from reach.

At various times of my life, I would have benefited enormously from trained interventions from mental health specialists to help me work through the issues that were at the core of my distress. It was never about food, just as my alcoholism was never about the alcohol, both are about the underlying pain and the need to be free of pain. Sadly, because I internalised everything that happened as personal shame, leading to a feeling of being ‘fundamentally flawed’, I always saw my distress, and somewhat erratic attempts to soothe myself, as character defects, rather as issues that could be healed. 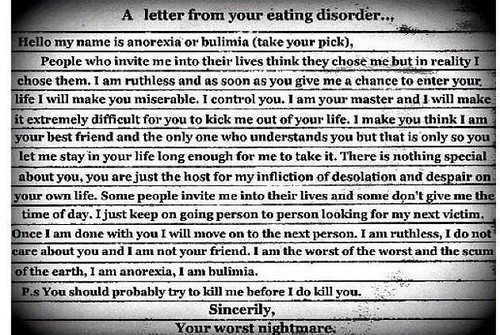 In looking for images to accompany this post, not an easy task, I found this. It really struck a chord with me as it reminded me of the ‘letter to alcohol‘ I wrote last year. This is not surprising, addiction and eating disorders share root causes, and some of the behaviours doctors use to diagnose clinical problems are striking in their similarity.

If someone you know struggles with an eating disorder, please remember that first and foremost what is needed is compassion. They are not doing it to be difficult or to cause anyone pain, they are in a huge amount of pain themselves, and this is their way of trying to manage it.

In the UK, the theme of this year’s ‘Eating Disorder Week’ is ‘Why Wait’. It can take up to 3 years for someone with an eating disorder to receive the full treatment they need. This is too long. Too much harm can be done by then, but the quicker action is taken the sooner they can get help. If you, or someone you love, is suffering with an eating disorder, you can get help and support from BEAT, find out more here 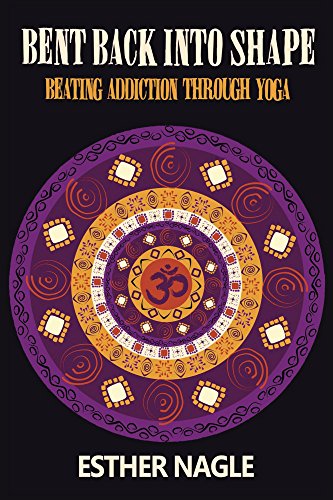